Our Napa Valley Wineries Tour OR How BV Saved the Day

Napa was almost a complete disaster.

We woke up in the Bothe-Napa State Park and it was cloudy and a little cold. We almost missed the bus into town and had to run to catch it. We rented bikes to ride to the wineries and as soon as we started riding, it started drizzling.

But there was wine to be drunk so we were still in good spirits. 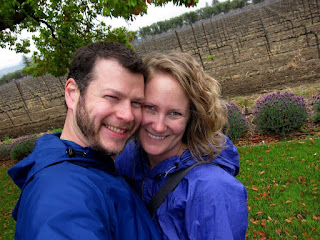 First up: Louis M. Martini. We locked up the bikes, walked in and found out that their wine tastings and tours started at $15 each and went up from there. Undaunted and thinking that surely this was an anomaly, we moved on to the next winery. And the next. And the next.

Turns out $15 is now the starting cost for most tastings and tours in Napa. Booooooo. Isn't the idea of a tour and tasting supposed to be a marketing technique to create lifelong customers who will buy your crap over the course of many years? Seems that Napa has gotten too big for their britches and wants to squeeze every ounce of money out of people they can.

We kept going, sure that there must be a winery SOMEWHERE that had free or cheaper tastings. And we did indeed find one: V. Sattui.

It was $5 per tasting so we saddled up to the bar with hope in our hearts and cash in our hands.

Our hopes were dashed.

Our winetender, Rick, was surly and not only gave us extremely weak pours of shitty wine but did not rinse out the glass between wines. This could have been swallowed (albeit difficultly) as him just being a curmudgeon had he not been friendly, solicitous and even flirty with the young Asian women that were in pairs all around us. Rick filled their glasses with almost twice the amount ours were and rinsed said glasses between wines without prompting. Dude, did you seriously not think we would notice??

Needless to say, we filled out a comment card, complete with exclamation points and bolded letters.

Now for the good news:

I was ready to completely give up on Napa and write it off as a ruined day with crummy weather, snobby people and shitty wine. But Jon wanted to push on and it was a good thing that we did.

Because we found Beaulieu Vineyards (BV) and Robert. 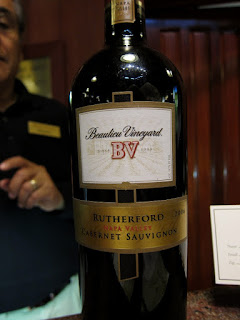 The wine tastings at BV still started at $15 but since we were met at the door by a very nice man who handed us a complementary glass of white wine, we decided to give it a shot. And we are SO glad we did!

Our winetender was Robert, who we found out later is a manager of some sort there. Robert not only spent a ton of time with us, truly educating us about wine and the Napa region, but he kept giving us more and different wines so we could taste what he was talking about. He probably gave us two to three times the wine that was in the offered tasting. We now know the difference between a Petite Sirah and a Syrah (they are completely different grapes, duh), why Cabs are good with steaks and Merlots are good with beef stew (pair a complicated wine with an uncomplicated dish and vice versa), how fortified wines like Muscat and Port are made (with Brandy, aged anywhere from 8-40 years) and how to get the full flavor of a wine while tasting (we'll have to show you that one...it involves sipping, swishing, holding, warming and sucking in air).

And with that, our luck had changed. We found a great little Tacqueria nearby for lunch and a big beer in a bag. 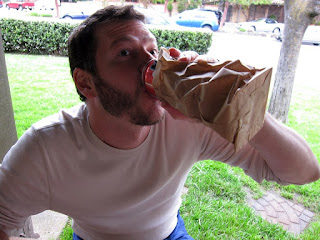 The rain mostly stopped and we even saw the sun for about five minutes. And best of all, we didn't have to run to catch the bus back to the campsite.

So what did we learn from this experience?

One: Really all we need in life to be happy is nice people. And perhaps some good wine.

Two: V. Sattui should be boycotted. Please pass this along.

Three: It doesn't take much to make a lifelong customer out of someone. We are now die hard BV fans and will likely purchase many thousands of dollars of their wines over the upcoming years. For what price to them? Some time, courtesy, knowledge and maybe an extra glass or two of wine.