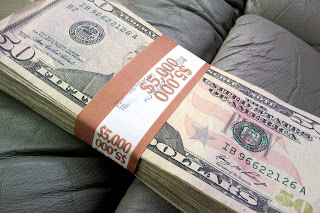 Craigslist never fails to amaze me.  Early this morning, at 1:11:34 AM to be precise, I posted a listing for my Toyota Tacoma for sale.  By 7:47 AM I had my first email indicating interest in the truck.  I wasn't awake at that time, but when I checked my email in the morning, I already had three responses.  Normally, I take the first person in line, but in this case, a gentlemen by the name of Fred (who had already sent me three emails on his own) was offering $200 more than the price that I had listed.  This is the second time that I have ever listed a vehicle on CL and this is the second time that I have received an offer over the list price.  Maybe I need to price my trucks a bit higher...

I called Fred at 9:01 AM to arrange a meeting time.  We decided that he could have a look at the truck at noon, during my lunchtime.  I drove home from work and Fred was waiting for me.  After a quick look at the vehicle, a drive around the block and a few questions, we had a deal.  Sold for the original list price.

Fred carried cash.  $10,000 worth of cash.  A bank certified check or a money order would have done the trick but...  whatever works.  I was relieved that we were both headed directly to the bank in order to get a notary to certify the title transfer.  The bank could verify that we were dealing with real money, and they could immediately take it off my hands so that I wouldn't need to look over my shoulder every ten seconds.

The timestamp on my deposit receipt was 12:32 PM.  Had I ordered a pizza at the same time I met with Fred, it might have just been arriving at my home, if I were lucky.  This was by far the fastest vehicle sale that I've ever been a party to.

Thanks, Fred!  Hope you enjoy the Tacoma as much as I did!

UPDATE:  If I had taken a longer lunch, I could have entered all 192 of the $50 bills at WheresGeorge.com.  But, since I have the picture, I at least recorded the first one.