By Jonathan May 21, 2012
Yesterday, the Curious Souls decided to take the dog for a walk. We were looking for somewhere that we had not yet been before, so we chose the Pawnee National Grassland. There were two very short trails in the western part of the grassland near Crow Valley Recreation Area. We hiked them both in under an hour (I said very short, right?) and were left wanting more. So, eastward we went on our way to Pawnee Buttes.

Along the way, we discovered the Cedar Creek Wind Farm and plenty of wide open space. 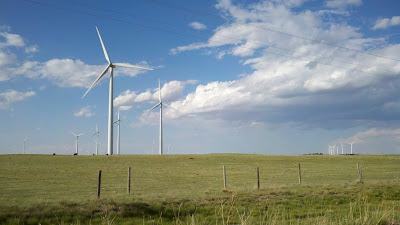 After the Buttes, we looked at the map and discovered that we were only about 20 miles south of Nebraska. And, to seal the deal, we noticed that just over the border was also the highest point in the state. Here we are at the aptly named Panorama Point. While only 5,424 feet in elevation it did have some lovely, long, expansive views into the seemingly infinite plains around us. 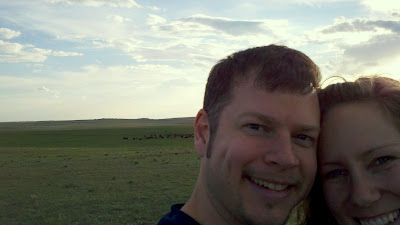 As far as either of us could remember, this is the first time we actually visited the highest point of any state. And it was certainly a fun excuse for extending our mini-roadtrip. Don't hold us to it, but we might just take up highpointing as a side hobby. Don't be surprised if you see us at the top of another state some time in the near future...