By Ellen October 11, 2010
I have a question for all of you Americans: have you ever seen hot dogs packaged like this? 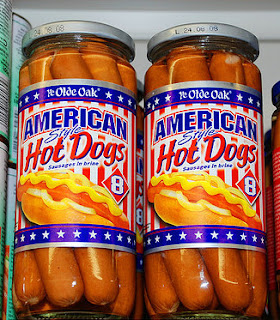 Disclaimer: this photo was actually taken in England on a different trip but we did see and photograph several examples of this exact product on this trip. I was just too lazy to go and find our more recent photos.

No! Our hotdogs come in non-recyclable plastic shrinkrap, duh! And despite our reputation of boiling hot dogs (as confessed to us by a very nice Danish hot dog vendor), I suspect most of the hot dogs consumed by Americans are cooked for 45 seconds in the microwave. We are not patient people.

This grievous representation of American hot dogs got me thinking about what kinds of things/food that we attribute to other cultures and how many of those are probably wrong or at least misguided and warped.

Here is my list. Feel free to add to it and to point out which items fall in the above mentioned wrong/misguided/warped category.

FRANCE
French onion soup (this one is actually served quite regularly in France and is, appropriately, called just onion soup there)
French fries (I don't think Freedom fries ever really caught on...)
French kissing
French toast
French bread
French dressing (what exactly about that unnaturally orangish colored dressing is French?)