By Ellen August 01, 2010
We are spending so much money in Europe that I have had about seventeen heart attacks this month over money.

Here are the dirty details: 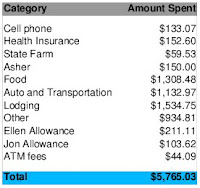 As if that amount is not already obscenely large, I need to add that we also purchased our Eurail tickets which were an additional $1,427.55. In case you don't feel like doing the math, that is $7,192.58.

There is really no way to rationalize around spending that much in one month but just for fun, I compared our spending this month vs. our spending during the US travel months.  In the comparison, I included what we are spending in Euros (when applicable) because that is what we "feel" like we are spending. I did not include the Eurail tickets because they were a one-time only purchase that will span two months of travel and because I didn't previously include the cost of our flights over here.


Here is how we are traveling now vs. how we traveled in the U.S. (I didn't include June because that was a weird travel month in which we were mostly with Jon's family):

So this actually made me feel the tiniest bit better although there were some surprises.

#1: We are spending the same amount on food in terms of how we budget units of money. In fact, we're pretty consistent on that over the months. Go us!

#2: Transportation is where I thought we would make up some ground in our budget but thanks to some unfortunate decisions, poor planning and one disastrous day involving a train re-route and lost tickets, this category did not decrease enough to make up for the huge increase in lodging.

#3: Lodging: I freely admit that our lodging expenditure could be lower if we were not so picky about wanting a private room and ensuite bathroom. But really, I'm ok with paying a little extra so we can lie around naked covered in wet towels when we're hot.

#4: Anyone notice Jonathan's allowance spending this month? He spent it all!

We may just have to amend our plan after our Eurail passes run out (we booked for 10 days of travel within a two month period). As much as I joke about sliding into my parents place on our last dollar, I don't actually mean it! We'll keep you posted...