Relaxing on The Eastern Seaboard

By Jonathan June 14, 2010
While we've been comfortably relaxing here in Southern Maryland, we've been neglecting the blog a bit. (Translation: Jonathan is way behind in his recap posts.) So, we'll try to make sure you all get back up to speed with our travels over the next few days.

After Montreal, we headed east to Quebec City.  QC looked even more European than Montreal, but felt a bit more touristy. And, none of those fantastic rental bikes to be had. And, we failed to use personal recommendations or Yelp to locate a restaurant for dinner. You'd think that it would be difficult to make bad nachos and pizza, but Le Cafe Buade succeeded. Lesson learned.

One interesting bit of history about QC is that the old part of town is a walled city.

After departing QC, we took the Route du President Kennedy on back to Maine. Other than the agent having a fantastic northeastern accent and him actually looking around inside the van, there was nothing too spectacular about our last (for the near future) North American border crossing. 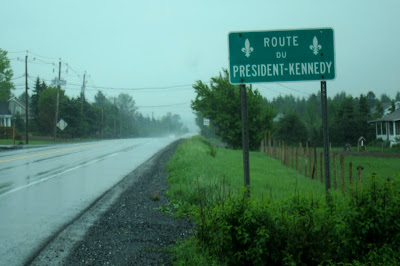