Pshaw! It doesn't rain in Seattle! 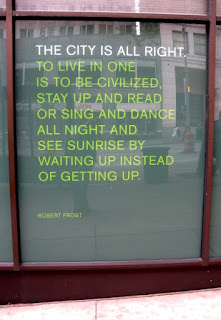 We're at my friend Dayna's house this week in Olympia, WA but before we got here, to this blissful place of regular bathing and constant internet, we went to Seattle.

It turns out, perhaps unsurprisingly since we're from Phoenix, that we love it when it's sunny. Well, Seattle rolled out the amazing weather for us when we were there and it was pretty much a perfect day.

We started at the Seattle Public Library which has stunning architecture and free wi-fi. And then we split up.

So we split up. I went to Sushi Kanpai and had some of the best sushi I've ever had  (and I'm not just saying that because I'm sushi deprived - that was some fresh fish!). Jon went to Sichuanese Chinese Restaurant in the ID. I can't comment on how good his was because I can only imagine that it was nasty. I think he said he liked it. Or maybe said he liked it a lot. Whatever. Being the more culinarily adventurous of the two of us, he also stopped at a Chinese Bakery and got a bean pie pastry thing. 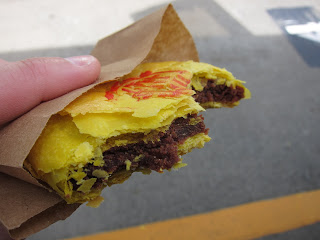 I spent the rest of the afternoon in the library (ahh, books, how I've missed you!), a bookstore and a lovely plaza complete with a kick ass accordion player.

Jon took a walk around the city after lunch and then also spent some more time in the library. 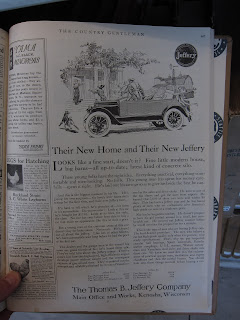 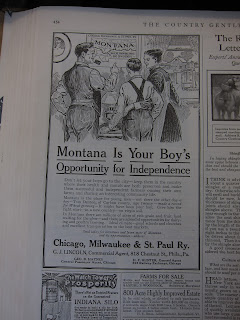 We met back up at the end of our parking time limit and headed to Volunteer Park. Sadly, the conservatory was closed but we were able to drive and walk around this lovely park and Jon even climbed to the top of the water tower...

...for some great views of Seattle and Mt. Rainier. 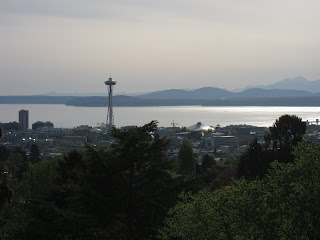 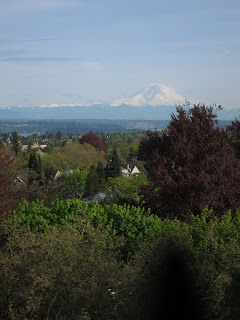 And then we proceeded to drive to Olympia. But not before we stumbled on a neat beach park on the bay with an incredible view and a lively scene... 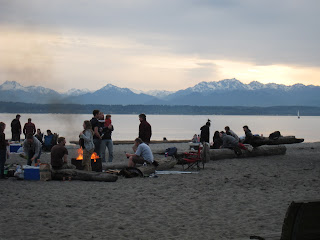 ...and the Hiram M Chittenden Locks.

All in all, one of our best days since San Fran. Seattle might be going on the short list of places to live...