These Are a Few of Our Favorite Things

By Ellen July 29, 2010
We had a lot of fun in Germany, the highlight being seeing my friend Anke for the first time in nineteen years! We will go into more depth about each city we visited but for now, I wanted to share with you some of the most memorable parts of our German experience.

Anke teased me about my preoccupation with the windows but as you will see in this video, they are super fantastic!

And not only are they super fantastic, they are in all of the hotels (and apartments), no matter what floor you are on. Can anyone imagine those windows in the U.S.? American hotel windows either do not open or do not open very far. Wouldn't want us crazy Americans jumping out of the window, right? This was only one of many, many examples of Germany treating their citizens like adults instead of truant teenagers.

Ok, they're probably not called Crepe Pillows but that's what we called them because they were the thinnest pillows we had ever seen! 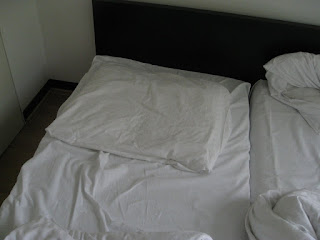 They were also square which was fortunate because by the end of our time in Germany, I was folding mine over twice to get the height I needed. They were, however, extraordinarily useful for blocking out noise as you could easily wrap it all the way around your head. Kind of like a head burrito.

The first time we encountered the locks, it seriously took us several minutes to figure out how to open the door. Fortunately, we learn quickly and eventually came to appreciate the security and solidity of the locks.

We may have seen the Berlin Wall, listened to the largest Baroque organ in Europe and drank beer at Munich's oldest brewery but it is the little things that we will likely remember and which make me smile when I think of Germany.